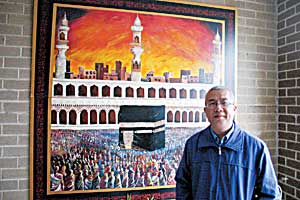 I am, after all, what God made me, what He brought into life. But why does God give me a life?
When God assembled the angels and told them that He was about to bring another breed of existence besides the angels and the djinns, and not only that, this breed of existence will be given the mantle to govern a kingdom called earth, the angels were alarmed and said to God, ‘Are you to make on earth one who would spread mischiefs and spill blood, whereas we glorify you with praises and esteem your loftiness?’ Upon hearing this, God called Adam, the first of this breed of existence, and asked him to demonstrate to the angels that special gift he was given, that gift called knowledge. When Adam had finished demonstrating to the angels this endowment which he was given, God then asked the angels to do the same, but the angels could not do so, admitting to their limited ability to know. Thus, it is knowledge that makes the difference between the ranks of the humankind and those of the angels, and it is knowledge that makes human beings the worthy inheritors of earth who will govern it.
But what do we understand by knowledge? For many of us, knowledge simply means two things. On the one hand, it is about what we can know through what we see, touch, and feel. On the other hand, it is about what we can think with the mind. It is with knowledge that man demonstrates his superiority over all that exists, turning the dense jungles into habitable places and transforming the arid deserts into fertile lands, and in modern times, sending men and machines into space. These already speak volumes of man’s qualification to inherit earth and govern it.
But is knowledge only about the material achievements of life, about building skyscrapers, rockets, and computer technology; about better medical discoveries so that we may stay healthy and be free from diseases; and about having food of superior quality?
Knowledge has often been equated with the intellect. What is the intellect? The intellect refers to four aspects of our knowing faculty and ability, according to the notable Muslim scholar, Al-Ghazali (1058-1011). These are ruh or human spirit, qalb or heart, ‘aql or mind, and nafs or self.
Ruh is the subtle lofty entity that the moment it conjoins the body, life springs into vitality. Qalb is the pineapple-shaped blood-pumping organ located at the left of our body, the seat of conscience, cognizance, passion, and compassion. ‘Aql is the faculty of knowing and is usually identified with the brain, that thinking and judging ability of the mind. Nafs is the totality of the self through which a person’s humanity is measured according to the temperament of this entity, whether it is an erratic soul that incites a person to commit blameworthy acts, a mediating soul that is trying to stabilize between the pull of the blameworthy and praiseworthy attractions, or a tranquil soul where a person is constantly in control of his self.
Taken as a whole, the intellect, in the wholesome and comprehensive meaning of it, is the ruh, qalb, ‘aql, and nafs, all at once. How penetrating is the force of the intellect, depends on how the four entities co-ordinate with one another to produce a synchronicity and symbiosis of knowledge. The mind alone is not knowledge in its totality, and so are the senses, as well as the heart. Therefore, knowledge of things in its broadest sense must encompass the senses, mind, and heart. Knowledge, in the true sense of the word, is sensing, rationalizing, feeling, and ‘conscience-ing’, all at once. It is to know what the eyes see, what the mind judges, what the passions attempt to alter, what kindness says, and what the conscience or ‘inner voice’ mediates and affirms. It is to see outward and to look inward, to observe the visible and physical, to comprehend the abstract and philosophical, and to digest the spiritual and invisible. It is, in modern academic terms, the union of science, reason, art, and religion. Knowledge is the intellect in the true sense of its meaning. And it is this intellect that is the special gift of man, that made him a special breed of existence, that endows him with the privilege to govern earth, and that qualifies him worthy to be called human being in its noblest of meaning.

Your ticket for the: THAT SPECIAL THING CALLED INTELLECT