WORK PLAN FROM THE EDITORIAL BOARD – HOW AND WHY WE EMBARKED INTO THE AL QURAN WITH CHINESE TRANSLATION PROJECT. 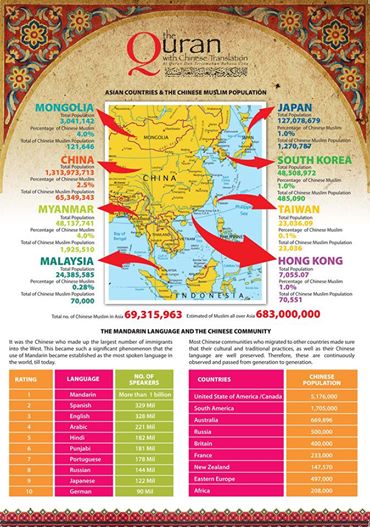 1) Challenges of translating Al Quran into Chinese language
The translation of Al Quran from Arabic to Chinese language is a sacred and serious work, requiring the translator to be proficient in both Arabic and Chinese languages, to master such fields as Tafsir, Hadith, Shariah, and Quran Studies, and to possess a high ethical standard. Consequently, it is difficult to find out a scholar with such high qualification to produce a fresh translation within limited time
.
The translation of Al Quran is indeed a vast and complex project, which entails huge energy and time. Chinese Muslim scholars who attempted to do so, such as Imam Wang jingzhai, Professor Muhammad Ma Jian, Imam Ma Jinpeng, and Professor Zhang Bingduo, had devoted their whole life on the translation work. In fact, the editing works of their translation had never been completed even until they passed away.

Therefore, we are of the view that it is nearly impossible to produce a fresh translation within a short period, i.e. one or two years, and with limited resources. In order to meet the immediate demand of the Malaysian Chinese Muslim community, the Editing Committee suggests that in this project we should focus on the recension and publication of an existing translation selected from the pool of acceptable translations.

Generally speaking, translations produced by i) Prof Muhammad Ma Jian, ii) Imam Wang jingzhai, iii) Ma Jinpeng, iv) Yang jing and vi) Lin Song are widely accepted as sound, accurate and reliable works.Among these five translations, the one produced by i) Prof Muhammad Ma Jian is believed to be the most authoritative. This translation, which has so far the largest readership, is widely accepted by academia, countless Mosques, and readers from all walks of life in China, Muslim and non-Muslim alike.

It is worth mentioning here that a few translations are rejected by the Chinese Muslim because the translators are unqualified to do the work, or because they have demonstrated dubious ethical standards. These translations have largely deviated from the true meaning of the Al Quran.

After repeated discussion, scholars involved in this project have unanimously voted the translation of Muhammad Ma Jian(الله يرحمه) to be the blueprint of this recension project. Most of these scholars have also expressed their willingness to participate in the editing works only if this translation is selected.

Conclusion:
The publication of Chinese translation of Al-Quran in Malaysia is an important move to promote Islam among the Malaysian Chinese society – especially the Chinese Muslim community, and among the world Chinese society at large. Seeing the project as an imperative and sacred mission, we Chinese Muslim scholars will uphold it seriously and responsibly, and will make every effort to achieve excellence in this work.

As explained, all existing Chinese translations of Al Quran are done by individuals. These translations contain inevitably omissions and inaccuracies that could sometimes confuse or misguide the reader. In this project, we are bringing together  top Muslim scholars from China and Malaysia to work hand-in-hand to produce a more reliable recension of the most authoritative translation. These scholars are respected and supported by the majority of Chinese Muslims for their extensive knowledge in Islam and their noble characters. Capitalizing on a collective wisdom, this recension will make epoch-marking improvement to the Chinese Translation of Al Quran,

Insya Allah.With such efforts, we hope all Chinese speaking people can understand Al Quran, understand Islam, and eventually revert to the straight path of Islam.
May Almighty Allah reward all participants working to spread the Holly Quran.

Your ticket for the: WORK PLAN FROM THE EDITORIAL BOARD – HOW AND WHY WE EMBARKED INTO THE AL QURAN WITH CHINESE TRANSLATION PROJECT.

WORK PLAN FROM THE EDITORIAL BOARD – HOW AND WHY WE EMBARKED INTO THE AL QURAN WITH CHINESE TRANSLATION PROJECT.